Dancing in the Land of Oy
A Tale of Love, Wonder, and Footwork

In Praise of Tomatoes: A Year in the Life of a Home Tomato Grower
"Shepherd embraces family, friends, and neighborhood for a thoroughly satisfying story"—Publishers Weekly

Our Fathers: Reflections by Sons
"Fourteen excellent essays by some of our best writers" —Austin American-Statesman

Diary of a Sewer Repair
This is what happens when they rip up the streets of your neighborhood.

THE HUMAN CONDITION
My son's band. He plays guitar, they play "purplegrass."
Authors Guild
Advocates for published authors since 1912
Authors Guild Directory
A compendium of member websites
Geographic names in the U.S.
Find the name of just about anyplace.
OneLook
Every writer needs a dictionary. Here's one link to more than a thousand.
Etymology dictionary
Find out where a word comes from.
Bartleby's Great Books
Classic poems, essays, quotations, and more.

Text and images can go here.

Our Fathers: Reflections by Sons

"I never knew anyone quite like my father,
but then I never really knew my father either"
—Daniel J. Boorstin 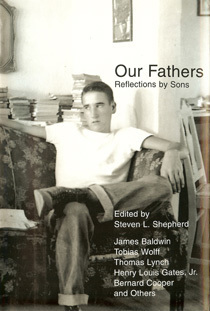 Click here to read an excerpt from the introduction.

Let's catalog for a quick moment the ways a father is important, particularly to his son.

He is a genetic template. He is a cultural template. He is the most complete model a boy, and then a man, has to measure his passage through life—be it as a role model or, as so often happens, a model of what not to be. He is a portal of identity.

As Steven L. Shepherd writes: " 'I am like this,' says the son, 'because he was like that.'

It's a perfect subject for the essay, as Steven L. Shepherd shows us in Our Fathers: Reflections by Sons. In more than a dozen pieces by different authors, some as celebrated as James Baldwin and Henry Louis Gates Jr., we see how the father-son connection is intensely personal, brimming with importance, full of anecdote and carrying an air of mystery that a writer can only poke at but rarely fully resolve.…

Fathers lead the way for many of us. This book shows us the many ways they do.

Of all the bonds of family, that of father and son may be the most mystical, the most emotionally loaded.

Whether a father's legacy is sweet or crippling, simple or tortured, sons either thrive or just barely survive in the aftermath.

Anthologies have celebrated the mother-daughter relationship, and mothers and sons are well-represented in literature. But it's the father-son dynamic that struck Steven L. Shepherd in a movie theater, while watching one of those contemporary classics that would make almost anyone's list of acceptable tear-jerkers for men, Field of Dreams. When Kevin Costner's character meets, via movie magic, his dead father as a young man, Shepherd found himself not simply getting teary, but sobbing convulsively.

"The unexpected intensity of my emotion…," Shepherd writes, "had to do with the power of the father's appearance as a contemporary of his son—with the father shorn of his usual advantages of experience, power, and authority, but having gained in return the optimism and assuredness of youth. The father and son on an otherwise impossible equal footing."

As a writer, Shepherd knew enough to seek comfort in other sons' stories. "Fathers, it seemed, were everywhere," he writes. "And everywhere they were under scrutiny by their sons." Shepherd began collecting essays, ultimately culling hundreds down to 14 for publication. All the essays have been published before, most in magazines and literary journals. Together, they are a powerful force.…

In all the essays in Our Fathers, what is most striking is what is forever unsaid. Amid the banter—about baseball, clothes, cars, women—every one of these writers is looking for that one insight, that one key to understanding the man behind the father.

"Every once in a while," Roland Merullo writes, "during some poignant pause in the busyness of his life, my father would be alone with one of us and make a comment like: 'Someday I'll tell you everything. Someday we'll sit down and I'll tell you things.' But what these things were we had little idea, and the promised 'someday' never arrived.…"

Maybe every son is looking for an epiphany, a light-bulb moment when all the mysteries that make up their fathers become perfectly, even painfully, clear.

This is not a collection of horror stories; nor does it devolve into cloying sentimentality. In these true stories, some fathers work six days a week, and some get drunk every morning. Some are role models, and some are monsters. Some stay, and some leave. And their impact is undeniable.